Over the August Bank Holiday weekend I, along with 90,000 other music fans, descended on Little John’s Farm for this year’s Reading Festival.

I love going to festivals, but despite being a local have only actually been to Reading for one day back in 2007. This year however I was heading backstage to report on the Festival and interview the bands for View TV. 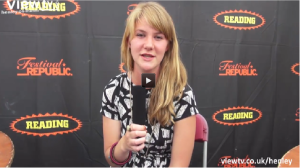 We arrived for day one, I was feeling very excited, but slightly nervous as this would be my first time in front of the camera. However, it turned out there was no time to panic as we were thrown straight into the first interview.

First up it was two members of The Blackout, who were lovely to chat to and very funny, telling me various stories including the time they were asked to, and did, sign a man’s nether regions. I really enjoyed the interview and the guys made me feel very relaxed.

After the first interview was so much fun, I forgot my nerves and couldn’t wait to do it again!Next up were the gorgeous boys from local Reading rock band, Attention Thieves.
The guys were performing on the BBC Introducing stage and are definitely ones to watch!

Another one to watch is the lovely and very talented Danica Hunter, from Henley. I recently spoke to her as she opened the Henley Festival the same night as Sting, and now here she was on the BBC Introducing stage at Reading.
We caught up with her after her performance to see how it went.
One of the songs she performed during her set was a collaboration with Frank Hamilton – who is writing one song a week for the whole of 2012. The song is called ‘Song about a weekend’ and is very catchy and currently available on itunes, I advise you to have a listen.

Next up was Hadouken who I was very excited about as I have been a fan of them for a while and seen them a few times before. Maybe a little bit too excited as I jumped up to hug their tour manager as he went to shake my hand!? But they were so much fun to chat to and told us about their first single, with their new label, Ministry of Sound Records – ‘Bad Signal’ – slightly different to their older stuff and samples The Supremes ‘You Keep me Hangin’ On.’

Finally we were lucky enough to grab The Hives to have a chat with. We had seen them earlier as they played to a packed out Radio1/NME tent, and they told us how great it was to be back performing at Reading after 8 years.

So Saturday we were back for day two, ready and raring to do it all over again. We spoke to a very jet-lagged Mastodon who had just arrived from the USA, and had a fun interview with Blood Red Shoes following their debut performance on the mainstage.
However, the highlight of today was definitely Florence and the Machine, I have wanted to see her live for a long time and she did not disappoint – incredible!!!
A surprise of today was Kasabian who were headlining the mainstage, I have never been a particular fan, but really enjoyed it!

Sunday came, the final day of the festival and we had an interview with The View, I thought I would try and be funny and ask how long he had had his jeans on for but decided against it… Same Jeans? Plus, had slight trouble understanding their very Scottish accents!

The weekend ended spectacularly with a headline set from the Foo Fighters, closing the mainstage with a marathon 26 songs in a 2.5 hour set.

So after an amazing weekend, full of cider, lots of laughs and a fair amount of celebrities .. it was over. Think overall the presenting didn’t go too badly, perhaps slightly too excitable.. but hey it was my first time! Had the most incredible experience, very sad it was over.. but can’t wait to do it again!!

….Until next time xx